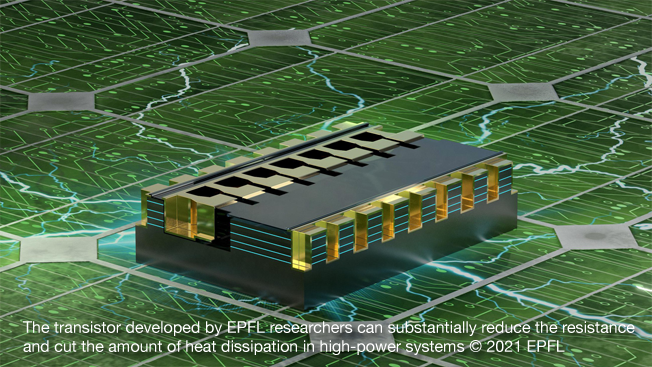 Energy dissipation is one of the biggest challenges in running high-power applications, such as an electric vehicle or a solar panel installation. Although state-of-art power converters are built to tolerate high voltages while converting energy to make our electronic devices work, they lose almost a fifth of their energy in the process. Researchers at the Power and Wide-band-gap Electronics Research Laboratory (POWERLAB) in EPFL’s Institute of Electrical Engineering (IEL) have been working to circumvent this problem. In a collaboration with other scholars in the field, the POWERLAB team led by Elison Matioli has just published the results of their research in Nature Electronics.

In their paper, the researchers introduce a nanowire-based device to create high-electron-mobility tri-gate transistors for power-conversion applications. Based on nanoscale structures, the novel transistor design significantly reduces heat loss during the energy conversion process. The nano-transistors work well in high-power applications by tackling electrical resistance, the main culprit in electric power loss. As Elison Matioli explains, “We see examples of electric power losses every day, such as when the charger of your laptop heats up.” The problem multiplies in high-power applications because the resistance increases with an increase in the voltage of the semiconductor components. That has a direct impact on the efficiency of the application. For example, it could reduce the range of an EV because power losses occur in the vehicle when charging.

Compared to traditional transistors, the new nano-transistor has less than 50% resistance even at high voltages of more than 1000 volts. It delivers such high efficiency because of two innovative design elements. First, it incorporates multiple two-dimensional electron gas channels, which allow more electrons to flow and improve conductivity. Second, it uses nanowires made of gallium nitride, a semiconducting material best suited for power applications. Further, the nanowires have higher resistance due to their funnel-like arrangement.

The new technology is still being tested, but the researchers are confident that they can quickly transition to large-scale production. That is very good news for a market ripe for transistors that can perform efficiently at high voltages. The POWERLAB team has already received several inquiries from manufacturers to work together to take the technology forward.