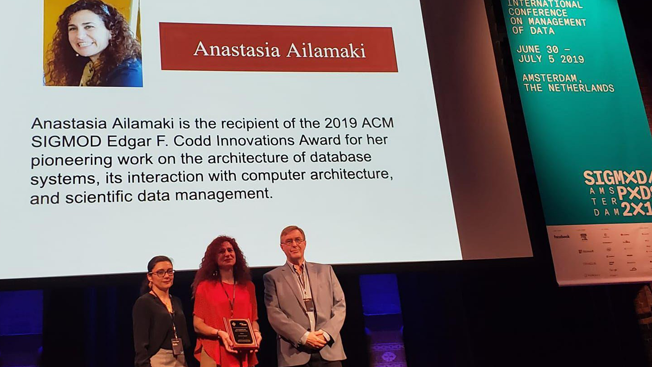 Anastasia Ailamaki, professor of Computer and Communication Sciences at EPFL and co-founder of RAW Labs SA, has been honored with the SIGMOD E.F. Codd Innovation Award. The award recognizes her “pioneering work on the architecture of database systems, its interaction with computer architecture, and scientific data management.” She joins a distinguished group of past awardees, all of whom are influential scientists in the field of database management.

The award, instituted in 1992 as the “SIGMOD Innovations Award,” was renamed in 2004 in honor of Dr. E.F. Codd (1923–2003) for his invention of the relational data model and significant role in developing database management as a scientific discipline. The award is an acknowledgment of Professor Ailamaki’s innovative, highly significant, and enduring contributions to the development, understanding, and use of database systems and databases. It adds to her bouquet of distinctions that include the EDBT Test of Time award (2019), the Nemitsas Prize in Computer Science (2018), ERC Consolidator Award (2013), the European Young Investigator Award from the European Science Foundation (2007), the Alfred P. Sloan Research Fellowship (2005), and ten best-paper awards in database, storage, and computer architecture conferences. She is also an ACM fellow, an IEEE fellow, and an elected member of the Swiss, Belgian, and Cypriot National Research Councils.

Professor Ailamaki received the award at the prestigious ACM SIGMOD conference held in Amsterdam between June 30 and July 5. The event is the foremost gathering of researchers on data management for industries as well as the academia.