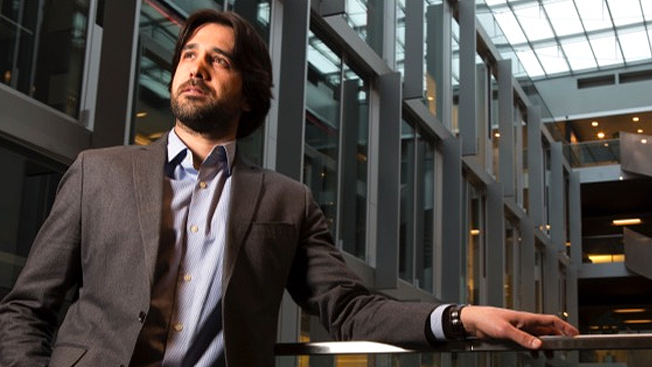 Elison Matioli, assistant professor at EPFL’s Institute of Electrical Engineering and director of the POWERlab, has joined EcoCloud.

Prof. Matioli comes with rich and varied research experience. After obtaining a Bachelor’s degree in Applied Physics and Mathematics from Ecole polytechnique (Palaiseau, France) in 2002 and a B.Sc. in Electrical Engineering from Escola Politecnica, University of São Paulo (Brazil), he pursued his doctorate studies at the University of California, Santa Barbara (2006-2010). For his Ph.D. thesis, he worked on ‘Embedded Photonic Crystals for High-Efficiency GaN-Based Optoelectronic Devices.’ For the next five years, Elison Matioli worked as Postdoctoral Associate, first at UC Santa Barbara (2010) and then at Massachusetts Institute of Technology (2010-14). He joined EPFL in 2015.

In his research through the years, Prof. Matioli has worked extensively on the conception of advanced semiconductor technologies for energy-efficiency applications. More specifically, he has explored the application of nanotechnology to semiconductors to demonstrate large-area nanostructured electronic and optoelectronic devices that outperforms the state of the art.

His research work has been recognized on various platforms. In his years as a student, Elison Matioli received the Outstanding Graduate Student – Scientific Achievement Award at UC Santa Barbara (2009), Best Oral Presentation award at MIT/MTL Annual Research Conference (2012), and the George E. Smith Award from the IEEE Electron Device Society (2013). In December 2015, he received the ERC Starting Grant Award from the European Research Council (ERC) for his research on III-Nitride Nanostructures for energy-efficiency devices (In-Need).

EcoCloud welcomes Prof Matioli to its fold. With his induction, EcoCloud adds a new dimension in the allied fields of materials science, applied physics and electrical engineering.