RPCValet features on The Morning Paper

HomeRPCValet features on The Morning Paper 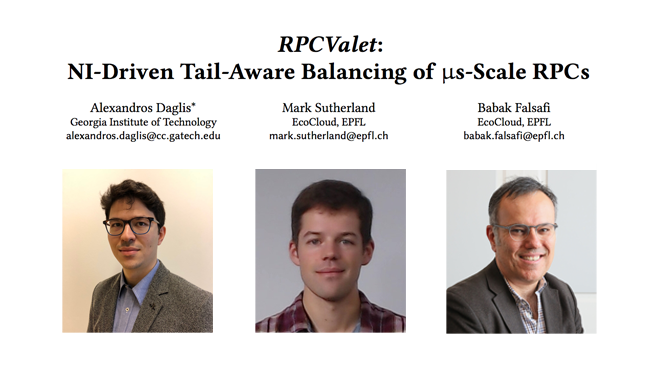 Every weekday, avid followers of computer science wake up to a new writeup by the inimitable Adrian Colyer on his blog The Morning Paper. His insightful selections help bring practical ideas from the academia to the computing practitioner. In a year, readers are exposed to concepts and ideas from more than 200 papers. In his latest post, Adrian Colyer presents a paper co-authored by Alexandros Daglis, Mark Sutherland, and EcoCloud Founder-Director Babak Falsafi.

The research (“RPCValet: NI-driven tail-aware balancing of µs-scale RPCs”) was conducted when both Daglis and Sutherland were working on their PhD theses under the supervision of Prof. Falsafi. The authors present RPCValet, which operates at extremely low latencies and targets reduction in tail latency by minimizing the effect of queuing. Thus, as Adrian Colyer points out, the EPFL researchers present “a glimpse of the limits for low-latency RPCs under load.” In other words, RPCValet represents one of the lowest possible limits of speed-of-light propagation, thus enabling optimum handling of RPCs at the endpoints as soon as they are delivered from the network.

The Morning Paper considers the research as an influential paper in the world of computer science, and with good reason. RPCValet is far more robust than current RPC load-balancing approaches because it performs within 3–15% of the ideal single-queue system. It improves throughput under tight tail latency goals by up to 1.4x, and reduces tail latency before saturation by up to 4x.