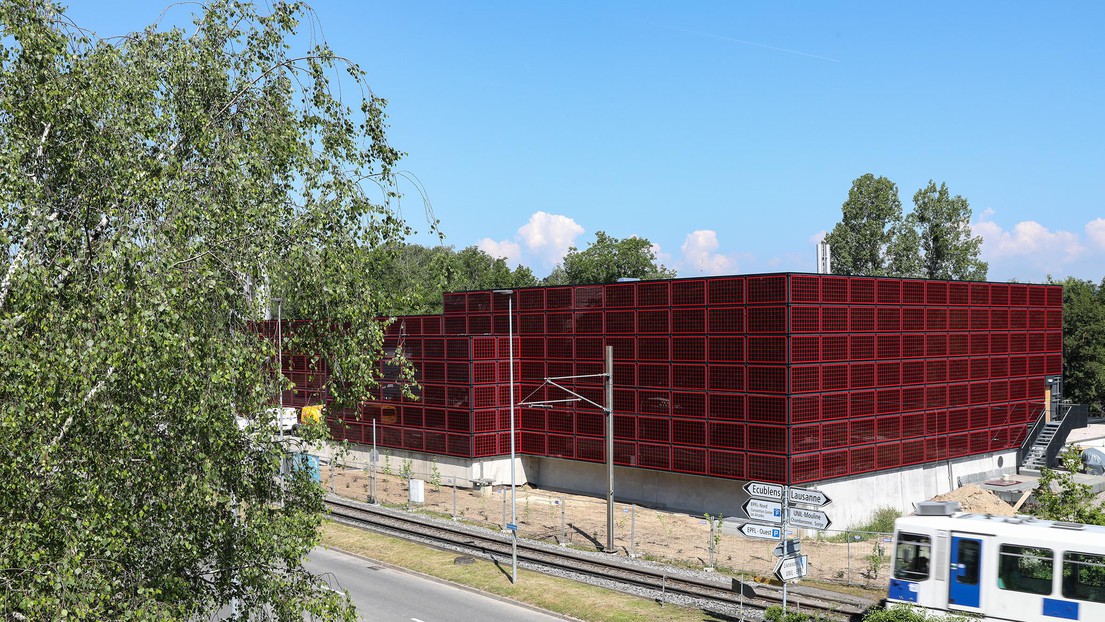 Today EPFL inaugurated its new heating plant, which has the capacity to heat and cool the Lausanne campus solely by drawing water from Lake Geneva and recovering excess heat from a connected data center. The ceremony was attended by local political leaders including Vassilis Venizelos, who is a Vaud Canton councilor and the head of the Canton’s department of youth, the environment and security.

The plant – some three years in the making – marks a major step towards the School’s goal of becoming carbon neutral. EPFL began renovating the heating and cooling facilities at its Lausanne campus in 2019 after they had become obsolete.
“Our School has long been a pioneer in making efficient use of energy resources,” says Matthias Gäumann, EPFL’s Vice President for Operations. “We installed the first lake-water-fed cooling system in the late 1970s, and in 1986 we began heating parts of the Lausanne campus with lake water, too. Thanks to the plant inaugurated today, all of the campus’ heating and cooling needs will now be met through a combination of water pumped from Lake Geneva, heat exchangers, heat recovered from a data center and solar panels. All that corresponds to 54% of the campus’ total energy requirement.” 40% of the remaining energy comes from electricity and just 6% from natural gas; the campus uses no fuel oil.

Recovering excess heat
The new heating plant was built through a project with Bouygues. Its innovative design includes an integrated system bringing together different types of renewable energy. The sides and roof of the plant’s main building (located near a metro track) are covered entirely with solar panels, while a new pumping station makes it possible to draw water from Lake Geneva. This water – sourced more deeply than in the previous plant – is drawn at a constant temperature of 7°C before next-generation heat pumps raise it to 67°C through a thermodynamic process involving compression, condensation, expansion and evaporation. The end result is significantly better energy performance.
Another major advance is that the plant makes use of the excess heat generated by a data center built on top of it, through a system that was started up early this year. The server-rack doors in the center are designed to accommodate filtered industrial water cooled by lake water. The system is energy-efficient and technically quite bold due to the challenges involved in running water near electrical fittings. By using the heat recovered from cooling the servers to warm the rest of the Lausanne campus, the School can cut its power bill considerably, particularly when compared to the conventional approach of using refrigeration units to cool servers.

“A crucial step”
Looking further ahead, the plant could one day make use of a nearby composting facility that converts organic waste from neighboring parks and gardens. A digester for food waste from campus cafeterias could also be installed, eventually leading to small-scale local biogas production.
Last but not least, the new plant could also be used for research aims. EPFL’s EcoCloud research center is working with the School’s Energy Center on a project to reduce the data center’s carbon emissions. The project entails incorporating the solar panels on the heating plant along with a battery located on campus, and setting up a system for controlling the data center directly.
“Few people in the EPFL community have ever really wondered where the energy they use to heat buildings, light up classrooms and run experiments comes from,” says Gisou van der Goot, EPFL’s Vice President for Responsible Transformation. “But times are changing, and we need to showcase our School’s energy strategy as an example worth following. Especially in today’s circumstances, it’s reassuring to know that our main campus uses no fuel oil and almost no natural gas, and runs primarily on renewable energy thanks to our new heating plant. This plant marks a crucial step towards our long-term objectives.”

Key figures
54% of the Lausanne campus’ energy comes from the heating plant, which uses water from Lake Geneva to heat and cool the entire campus
6% comes from natural gas
40% comes from electricity
218 GWh expected energy use in 2022