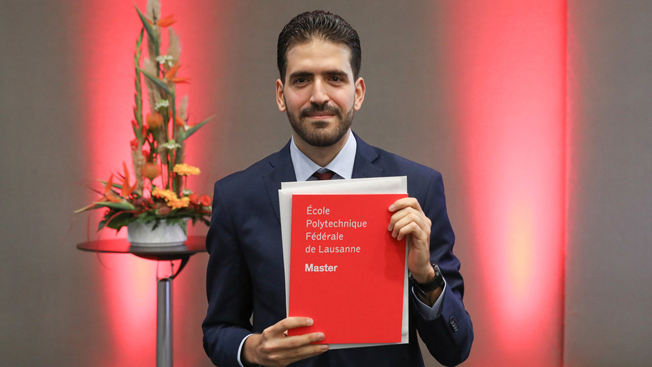 Each year, a student of the Microengineering Section of EPFL is awarded the prestigious OMEGA Student Award for contributing to scientific and technological advances in the disciplines of Microengineering, Micro- and Nanotechnologies, and Chronometry. This year, the Board of the Foundation of the OMEGA Prize decided to honor Mohammed Hédi Fendri, a master student at the Institute of Microengineering in EPFL’s School of Engineering.

Hédi’s Master’s thesis “ML-Based Side-Channel Analysis and Disassembly of Hardware Root of Trust” is based on his findings in the industry itself. His research crossed path with the Kudelski Group, a Swiss company that has established itself as a global leader in digital security and convergent media solutions for the delivery of digital and interactive content. At Kudelski, Hédi was supervised by Jérôme Perrine and Marco Macchetti, Director (Engineering) and Principal Engineer, respectively. Hédi’s academic supervisor was Mirjana Stojilovic, a faculty member at EcoCloud.

In his thesis, Hédi devised a methodology for assessing the side-channel vulnerability of a device at design time and demonstrated its efficiency on a RISC-V CPU design, simulating the execution of the AES-128 encryption. The thesis also presents a novel side-channel analysis disassembler based on dictionary learning and sparse coding. Unlike previous works, which targeted 8-bit microcontrollers running on frequencies up to 16 MHz only, the proposed ML-based method can successfully recognize all instructions of a 32-bit RISC-V CPU running on frequencies as high as 100 MHz.

Hédi’s findings are both important and timely. With the rise of the IoT, smart home appliances, embedded medical devices, and other numerous IoT devices have become an attractive target for adversaries. Hédi’s findings enable significant reduction in cost and time necessary to accurately assess the side-channel vulnerability of an IoT device well before its deployment.

Laureates of the OMEGA Student Awards receive 1000 Swiss francs, usually in addition to an OMEGA watch. The award ceremony is held concurrently with the graduation ceremony for Master’s degrees in Microengineering at EPFL. The Board determines the number of awards every year; Hédi is the sole winner in 2020. We congratulate Hédi on receiving this award and wish him every success in his future endeavors.